BEOS und Swiss Life Asset Managers will be turning the 73-hectare Griesheim industrial park in Frankfurt am Main into the new FRANKFURT WESTSIDE campus, which has received DGNB Platinum pre-certification

A ceremony was recently held to unveil the new name of the former chemicals site. The DGNB pre-certification was presented at the event along with some initial images and the next steps. Demolition at the site has already begun.

BEOS and Swiss Life Asset Managers have not only released initial images but also the new name of the former Griesheim industrial park in Frankfurt am Main. The site is being converted into a modern commercial campus: FRANKFURT WESTSIDE. Today, the 73-hectare site also received Platinum pre-certification from the German Sustainable Building Council (DGNB). Among the commercial sites assessed for certification (DGNB system version 2020), the FRANKFURT WESTSIDE development received the second-highest rating in all of Germany.

The site was pre-certified on the basis of BEOS’ sustainable development plans. BEOS is the expert for industrial and logistics real estate at the Swiss Life Asset Managers corporation and one of the leading corporate real estate developers and asset managers in the country. The certification was presented in the presence of two members of the Frankfurt City Council, Mike Josef (Department Head for Planning, Housing and Sports) and Stephanie Wüst (Department Head for Economics, Law and Reforms).

Working with an external team of planners and consultants, BEOS and Swiss Life Asset Managers have created a transportation and mobility concept that encourages bicycle commuting, an effective, innovative energy concept that moves away from conventional heating systems and an attractive design for the outdoor areas at the site. The design of the outdoor space invites visitors to explore interesting areas between pipe bridges and infrastructure relics, newly designed squares and landscaped pocket parks. All of these details led to the certification, which acknowledges the achievement of ambitious eco-balance targets, responsible use of resources, extensive monitoring of on-site consumption and an effective social and commercial infrastructure. The infrastructure at the campus will promote well-being by featuring short distances to daily amenities and revitalizing the neighborhood through intensified use of public space. The design of the campus will also reduce traffic and the emissions that high traffic volumes create. 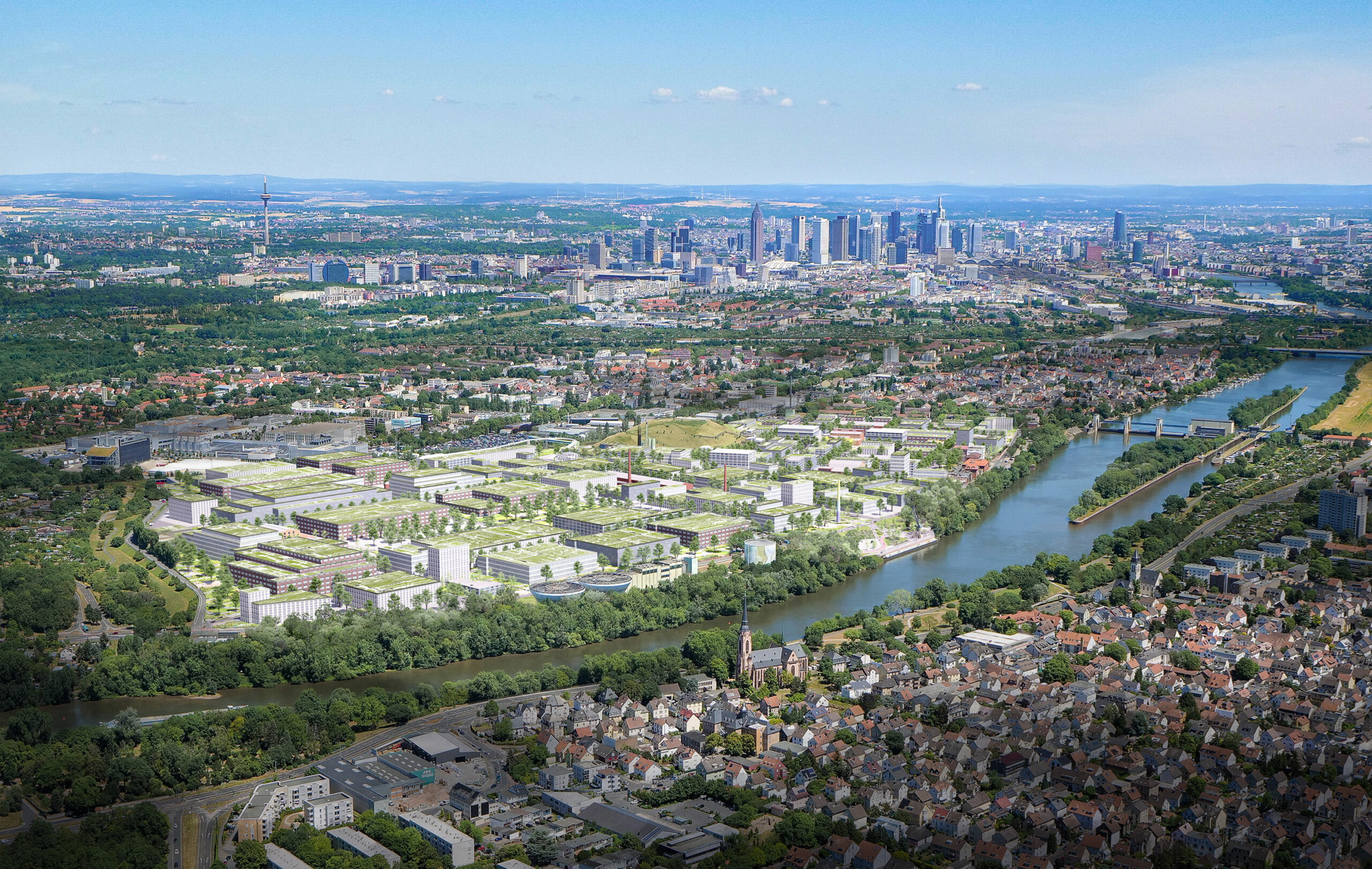 “With this pre-certification, we are making a public commitment to creating a sustainable campus in compliance with the highest of standards,” said Holger Matheis, Speaker of the Executive Board at BEOS AG, who accepted the pre-certification.

“Just the sheer size of FRANKFURT WESTSIDE not only makes the development relevant to the Griesheim district but to all of Frankfurt as well, and we are very aware of the responsibility that comes with transforming the site. At BEOS and Swiss Life Asset Managers, we not only see the site through the eyes of long-term property developers and investors. We also see it as a unique opportunity to create a pioneering campus in a central location that will support Frankfurt’s future,” Mathias Strauch, Senior Project Manager at BEOS AG, commented after the site’s new name was unveiled. Mathias Strauch is in charge of the development together with a team of six project and property managers located in Frankfurt.

Current status and next steps
During the event, the project management team also provided some insight into future plans. The demolition that has already begun will initially be continued. The new media and traffic infrastructure is also being planned and implemented at this time. The master urban development plan should be finalized in coordination with the City of Frankfurt by the end of 2022.

About FRANKFURT WESTSIDE
The Griesheim industrial park, which covers a total of 77 hectares, has been functioning as an established industrial and commercial site since 1856. The park is situated in a central, well-connected location in Frankfurt, directly along the northern banks of the Main River. The site started being used for the production of chemical products with the founding of the Frankfurter Aktiengesellschaft für landwirtschaftlich chemische Fabrikate (a listed company for agricultural and chemical products based in Frankfurt). More than 160 years later, change has become the norm at the site, which has primarily become home to SMEs from the industrial, trade and services sectors.

In January 2020, a joint development company of BEOS AG and Swiss Life Asset Managers signed a ground lease for 575,000 sqm with the site’s owner Clariant Produkte (Deutschland) GmbH. The company’s objective is to gradually transform the former chemicals site into a modern, mixed-use commercial campus. To support the achievement of this goal, the company then signed an additional ground lease in 2022 for one of the two remaining third-party sites. Both leases run until 2118 and cover a combined area of roughly 73 hectares, which is almost the entire site and the equivalent of around 102 football pitches.